I'm looking at the rhythm of the tides at Spurn (EasyTide) and try to find out how they relate to the movement of the moon - recalling how earth, moon and sun relate to each other. 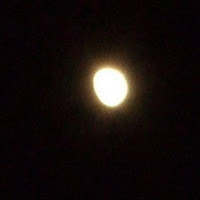 15 April 2008 at 21h45: The waxing moon in its meridian (45.6°). At this time it is low tide on Spurn. - Seen from the moon the blue planet appears like a negative mirror image of its natural satellite. (View of Earth from the Moon)

Another article by the Yorkshire Post, 22 March 2008
Family life at the point of no return

Sea defences along the North Sea side Man-made intervention shaped by the sea, wind and weather: Blocks of stones combined with parts of rusty metal and wooden poles (near the horizon) form sculptures such as this 'Steal-seal' 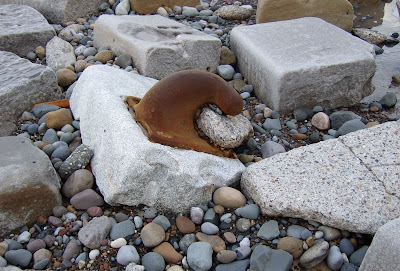 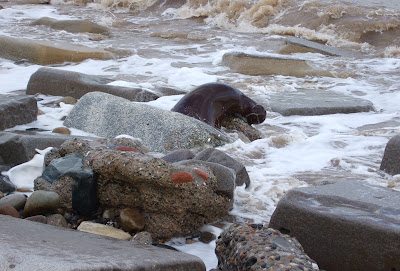 The water level rose about 3/4 meters within 3/4 hours. It will rise a further 2.5m and cover the blocks completely.

Watching the tides - North Sea side 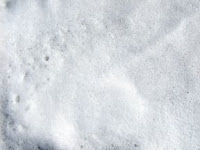 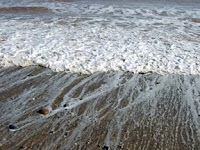 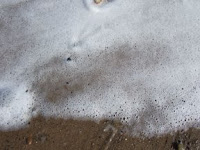 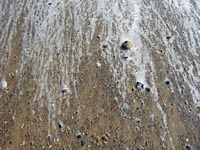 I spent a morning looking at the ebb and flow of the water and the foam produced by air and water mixing. This was at the time when the tide was going out.

Later I join threaded polystyrene balls to the scene. The ends of the thread are fixed to stones, so the balls can't escape.

The stringed balls float off as if they were part of the water-foam. For about an hour I watch the water recede. Its movement changes with the shape of the ground and the foam disappears gradually - together with the balls...!

Minutes later - it seems like an eternity - when the water has receded further, I spot one ball hiding among the shingle. The rest of the balls - still threaded - are buried up to one foot underground following the lead of the stone the thread was fixed to.

By the way: Polystyrene consists 98% of air, is fully recyclable and environmental friendly though it isn't biodegradable. Microscopic images of this material look very similar to the sea water foam I'm just looking at.

'On Spurn' is a research residency for six artists (see Events). We spent a mid-week-end on Spurn to initiate our venture. It was cold, windy, sunny, wet and beautiful.

During the residency I would like to look at the movement of wind and water which shape Spurn. Using threads (yes, again) I plan to create air and water drawings. We'll see what happens. For now it is just looking and listening.