A nice surprise to come across this documentation of Definitions of Drawing at Sunny Bank Mills last autumn, video by Courtney Spencer (curator) and George Hall (videographer)

Email ThisBlogThis!Share to TwitterShare to FacebookShare to Pinterest
Themes: Exhibitions


Reflective moment in the botanical garden of Braunschweig, early September 2021

Pictures of an exhibition

Definitions of Drawing has ended last Sunday - but here is a link to an album with images. 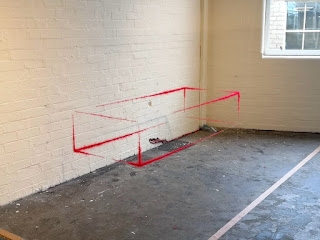 Email ThisBlogThis!Share to TwitterShare to FacebookShare to Pinterest
Themes: Exhibitions

I don't do this normally: install new work in a space I have never visited. But last week this was the only way: Coming more or less straight from the ferry, with a stopover at the studio to prepare the sculpture and pack tools, I arrived at Sunny Bank Mills Wednesday morning. In the evening, after working on autopilot for eight hours, Vacant Space, version 2021, stood - or rather floated - in the exhibition space.

Many thanks to Court Spencer and Sunny Bank Mills. I look forward to visiting the exhibition, seeing the other artists' work - and assessing what I have actually done. 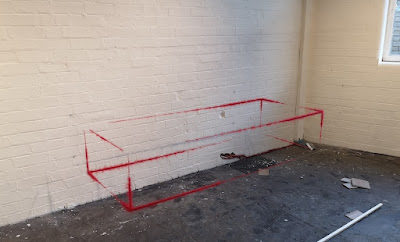 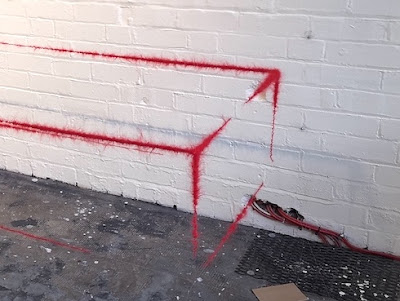 Happy to be part of this group exhibition at Sunny Bank Mills in Farsley near Leeds: 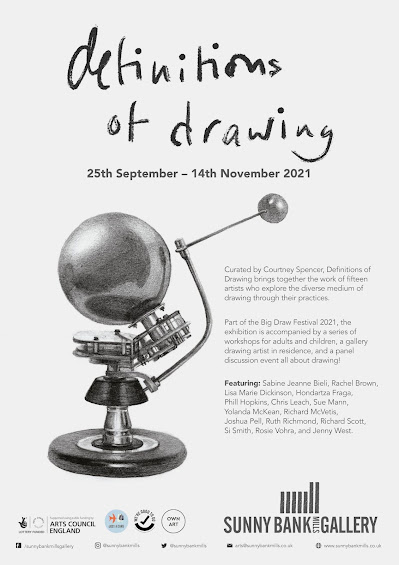 An exhibition that brings together the work of fifteen artists who interrogate the medium of drawing through their practices.

A moment in time

Two birds flying past, making a fleeting appearance on Live Sky - a 'slice' of sky floating in the space (CCTV live feed projection on acrylic glass).

A year has passed since the exhibition @ King Edward Street, Light Works. I had used the space for nine months as a laboratory, setting up new works in response to the space and refining existing ones. It has been an intense, demanding and beautiful time, a dive into new territory, quietly challenging me on various levels.

Subsequently the last year became a time of recovery - and also of final goodbyes, with  impromptu travel and long stays abroad.

It would turn into August before we could take down the projection works on the upper floors. And it was then, just before dismantling Live Sky, that I accidentally captured two birds flying by, a coincidence I could only dream of during the exhibition time... 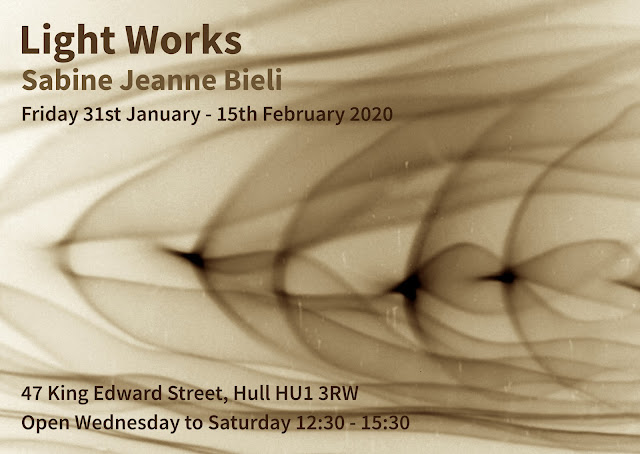 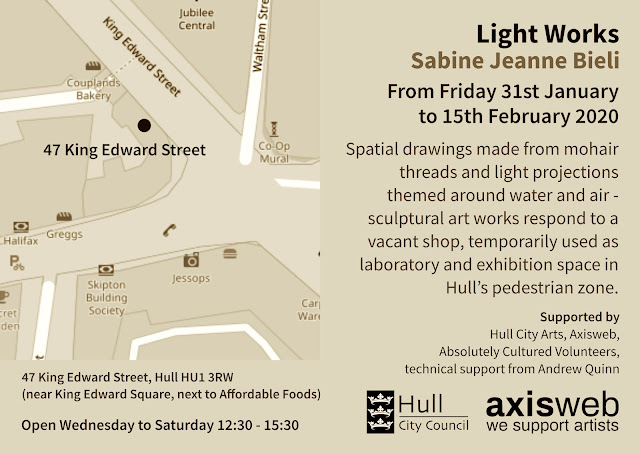 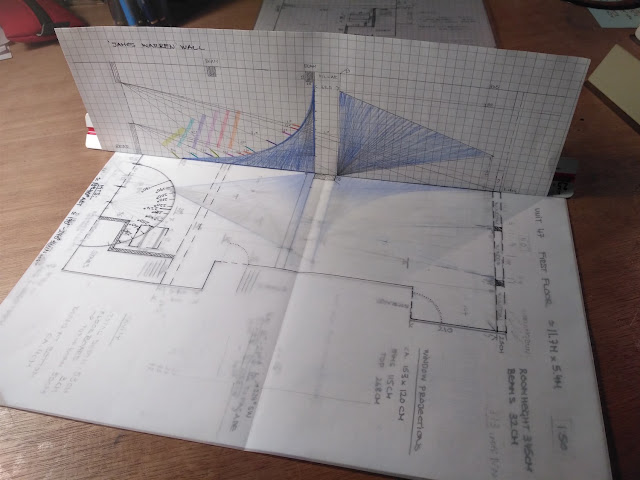 Figuring out light influx and possible dates and times to catch the sun for work during the first weeks from February onwards. We're on the first floor of unit 47. 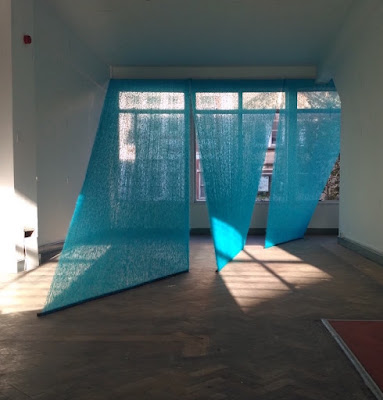 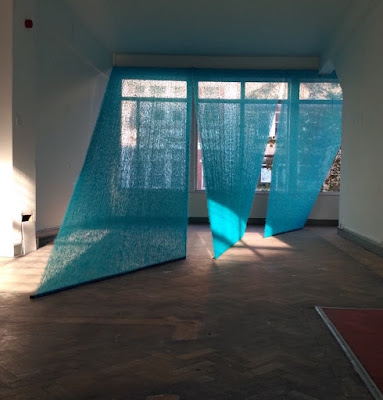 In the upstairs space: watching what the light does with this installation - three slightly twisted surfaces spread from the top of the front windows to the ground. Drawn with wool from the archive this 'drawing' can be easily varied and modified. The slightly curved layers bring an element of movement into the space - they seem to ask for dance performances.


The windows at the back of the building face SW and throughout October it was intriguing to watch the changing light and how the shadows cast by the evening sun grew longer every day, until - by the end of October - the sun was too low and hidden behind the neighbouring buildings.

In response to the changing light, I have developed a different shape for this space that revolves around the column in the middle of the room while checking the course of the sun and its coordinates: 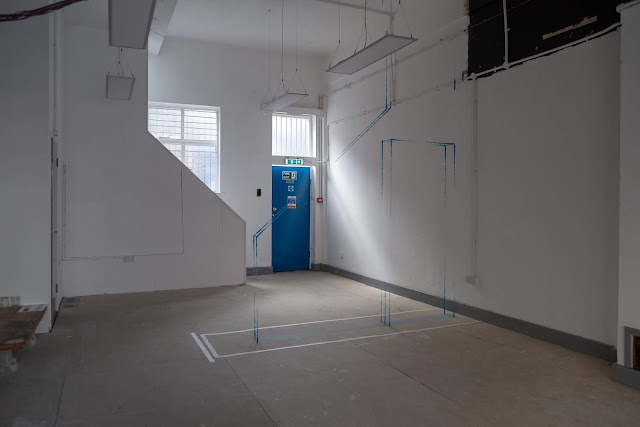 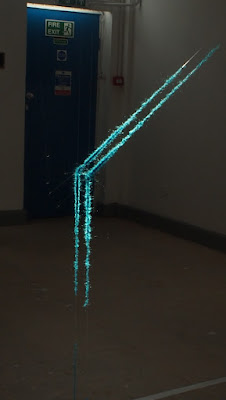 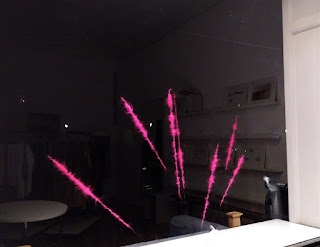 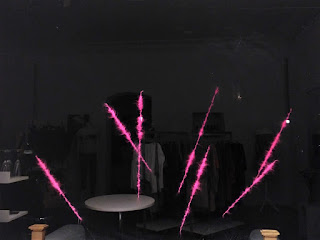