"... I could almost feel the undertow"

Ever since the joined forces of a storm-surge & a spring-tide hit the east coast on 5 December I was wondering how Spurn peninsula was faring. Only a week later we came across some images.

The road and the dunes have been washed away, the images below may tell the rest. Three dozens of the Yorkshire Wildlife Trust's Hebridean sheep, a rare and beautiful species, drowned in the surge. See Yorkshire Post  and [BBC].


The image below is taken on the morning after the surge at 9am, a moment after high tide.

The submerged area is the site where we, Jo and I, recorded Fr-Agile early in the morning on 8 August '08. It was a stormy day too and cold as if it was winter.

Trying to imagine what it must have been like on 5 December ... a comment in the visitors' book at South Square Gallery, where Fr-Agile first was shown, surfaces: "Standing close I could almost feel the undertow."

This referred to Buoy [Fr-Agile]. Here's a studio clip:


A long post, full of links, about a stretch of landscape - or rather seascape - that is rich in every aspect, wildlife, history and the power of the elements to name just a few. It's a microcosm that has been changed considerably. 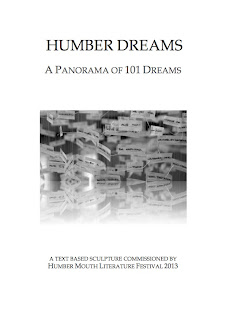 Humber Dreams* - A Panorama of 101 Dreams wraps up the texts gathered in the Dream Book on display at Hull Central Library during the literature festival. This booklet is now on-line for you to view and share.

Thank you to all who took the time to think and write. - Some dreams did come true - read on in the booklet...

Click the links below to view or download the pdf files.
A version that can be printed as a booklet:
Print double-sided on A4 (short-edge binding);
then fold and assemble to a booklet.

Enjoy - your comments are welcome.


* Humber Dreams is a text-based installation commissioned by Humber Mouth Literature Festival 2013. In response to the festival's theme "I Have  A Dream..." people were asked to write up the dreams they have for their life, for Hull, the region or the state of the world.

The small print: Most dreams have been sent anonymously. When names have been submitted I used the initials. Some longer texts have been shortened, trying to reveal the core. 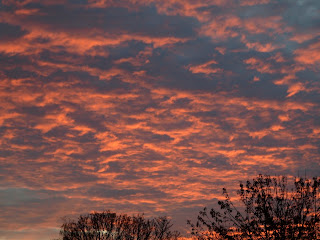 The sky at dusk, late November.
The camera can't really capture it...

While 101 Humber Dreams wait -
scattered on the floor -
currently my worktop -
to be compiled
to one 'Panorama'.

It takes a moment...
but I'm getting there.