Tides at the tip of Spurn 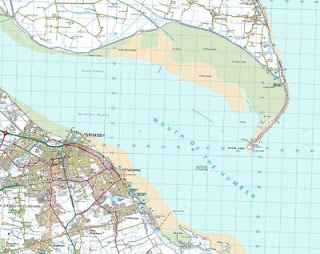 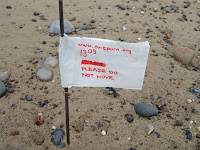 Last Thursday we - Jo and I - went to Spurn for a day. I wanted to find out more about the movements of the tides at the tip of the peninsula.

First I felt confused whether we were really at the tip. Instead of the open sea - as I expected - there was a strip of land at the horizon. It's not easy to orientate yourself when there's water all around you.

A look at the OS map shows that Spurn points straight towards the opposite shore of the Humber - a fact I wasn't aware of previously... 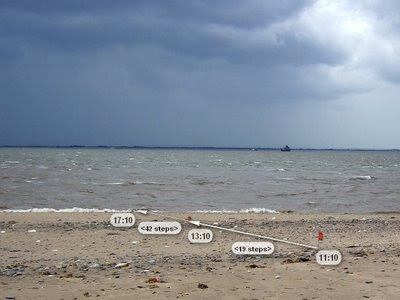 I marked the line where high tide left some debris at about 11:10 with a flag. Another flag marked the edge of the water when we arrived at 13:10.

I came back 4 hours later after a walk - almost at low tide. I measured in steps how much the water had receded from high to low tide. It must have been almost 60m. And according to the tide table the water level receded by about 4.4 meters in height.

The dark cloud in the image threw water at me horizontally when I walked back to Jo who was waiting for me in the car. I arrived there soaking wet - luckily only at my backside.